The Center was created as a result of the 2005 constitutional reform in Chile, which handed over important powers to the Constitutional Court. Thus began a new stage in our political-legal system, where Constitutional Justice, understood as the identification and resolution of conflicts or problems of constitutional relevance, acquired an unusual importance and influence.

The Center arises with the intention of influencing this new stage, collaborating in the development and improvement of constitutional justice, as well as the Legal Doctrines that serve as its sustenance. To this end, it has focused on the study of matters closely linked both to the structural and functional dimensions of Constitutional Justice, as well as to the matters on which it is pronounced and the consequences of its decisions.

In 2015, in the context of the extensive discussion about a constitutional reform or a new constitution for our country, the Center decided to redefine its approaches to action, redirecting part of its resources to address the constitution making debate. To this end, it has programmed a set of discussion and dissemination activities, such as national and international seminars, presentation of proposals for constitutional reform, and participation in various academic forums.

To this end in mind, the Center’s activity aims to identify the various historical, doctrinal, philosophical, and political factors that have shaped national constitutional thought and practice and those that currently influence it. Similarly, the Center aims to unravel the nature and extent of our Constitution’s links with both international law and the rest of the infra-constitutional legal system.

All this with the ultimate aim of positively impacting various areas of the national environment, thereby contributing to the improvement of our constitutional law and practice. For this, we seek, on the one hand, to generate spaces for reflection and dialogue, in which the diverse experiences and perspectives of various actors of private, administrative, judicial and political activity can converge. On the other hand, our research activity also aims to develop knowledge, diagnoses and proposals that serve the academy, judiciary, administration and government.

On the other hand, the Center explores, from various prisms of the social sciences, the background that has forged our current constitutional reality and the new factors that are at play. To this end, it studies not only national events, but also comparative constitutional activity in the face of the challenges presented by the development of global constitutional law. 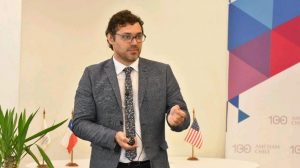